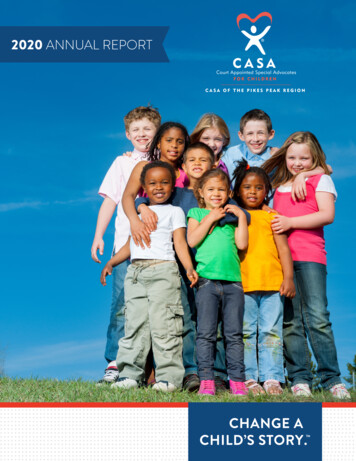 FROM THE CHAIROF THE BOARDDear CASA friends,Each year since 1989, CASA of the Pikes Peak Region has risen to the challenge of serving the most vulnerablechildren in Colorado’s Fourth Judicial District. 2020 was no different, despite the many trials and tribulationspresented by the COVID-19 pandemic.CASA advocates found creative ways to satisfy social distancing requirements while still working on behalf ofthe children on their cases. From online chess to porch donut-drop-offs, our advocates continued their advocacyin the ways best suited for the unique needs of each family they serve.CASA’s Supervised Exchange & Parenting Time program continued through virtual parent-child visits whileMilton Foster Children’s Fund events moved online or became mobile celebrations. We also kept The Hangeropen as often as possible so that foster teens could continue to shop for clothing and necessities.As it became clear that the pandemic was resulting in increased numbers of child abuse cases, CASAconfronted the problem head-on with web-based information sessions, online training, and Zoom swearing-inceremonies to ensure that volunteer recruitment continued unhindered.Nearly 400 volunteers put in 15,000 hours of work during the 2019-2020 fiscal year to serve 1,480 children in allfour of CASA’s programs. This is a result that could not have been accomplished without the generous backingof our volunteers, donors, and community partners.Although we missed seeing our many supporters in person at our three Light of Hope events in 2020, we aregrateful to have had the opportunity to successfully host those events in a virtual format.On behalf of CASA of the Pikes Peak Region and its Board of Directors, thank you for your steadfast support ofour mission to change the lives of at-risk children.Sincerely,Steve Mulliken,Chair of the Board of Directors

LIVES CHANGEDTHE CHILD: An 11-year-old boy who was removed from hishome due to lack of parental supervision that resulted fromhis mother’s drug abuse and mental health issues.THE ADVOCATE: Sara Lee, a retired pediatric nurse witha calling to care for others, became the boy’s advocate.As the most consistent adult he had ever had in his life,Sara took him on hiking outings, cheered as his biggest fanduring sporting events, took him shopping at The Hanger,and secured funding through Milton Foster Children’s Fundfor drivers’ education. Most of all, Sara helped him throughthe emotional toll of having an undependable mother.THE OUTCOME: Through CASA’s Life Long Linksprogram, Sara came to know the boy’s aunt and unclein another state who became a possible placement. Sheimmediately went to work to develop the relationship andoffer encouragement. At the age of 16, the boy became apermanent member of his aunt’s family and the case closedover WebEx during the COVID-19 pandemic.

PAUL LEMONSupervised Exchange & Parenting Time FacilitatorSEPT is a service for those who need a safe place to see their children andwhat I do is provide for this to happen. It is a meaningful expense of timeand it’s productive.“ Court Appointed Special Advocate “SARA LEEBeing a CASA volunteer provides me an opportunity to use my skillsand life experiences to help families and children in crisis in ourcommunity. The connections made with CASA children are often lifechanging for the child and their support system.JENNIFER DE LIMAMilton Foster Children’s Fund Volunteer When children enter the foster care system, they do not always have access tothe same opportunities and childhood experiences as their peers. This reallytugs at my heartstrings and it is the reason I volunteer for CASA. I know that byhelping to provide normal childhood experiences, I am making an impact onthe lives of these children.“Co-founders of VanguardSkin SpecialistsDR. VINH & MS. LEISLE CHUNG Vanguard’s mission is to make a positive impact on our patients, ourcommunity, and our world. Because we can make the greatest impact byserving the most vulnerable, we proudly partner with CASA to help fosterchildren reach their full potential.Court Appointed Special Advocate “JERIMA KINGAs a Court Appointed Special Advocate, I want to help bridge thelanguage divide between children and families, and the legal system,to benefit the abused and neglected children I advocate for.“FROM OUR SUPPORTERS