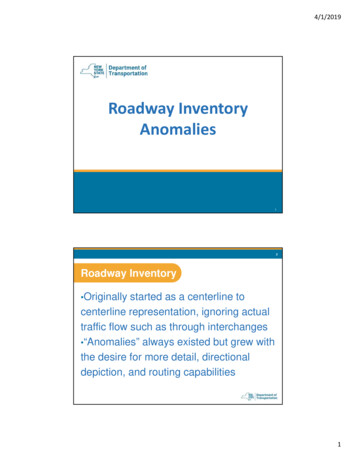 4/1/20193Nice grid pattern, easy to handle4Throw in some curves, still an easy centerline-to-centerline torepresent and get accurate lengths, number of lanes2

4/1/20197Centerline-to-centerline Worksfor overall system level depiction Works for state system assessment Traffic counts, VMT Pavement condition Getmore site specific for corridoranalyses and project designs, but theseare not “our” concern8But what about these? The “ramps” to either side are one lane. Do we ignore themand just add to the number of mainline lanes (have done so in small, local cases)?What if the ramp is two directional? Is this now three roads, not one? This particularexample is a mixed bag for NYSDOT where one side had a reference route, but not theother. As a state route, any compromise we use is up to us. But for a local road .4

4/1/20199Two lanes on each leg. Owned by County which wants“credit” for CHIPS state aid funding (0.03 miles)10NYSDOT did get rid of this one with a pavingproject on the state route with which it intersects.5

4/1/201911Centerline-to-centerline Worksfor overall system level depictionbut not for tracking all pavement mileagewhen that is of concern Also does not work as the need toemulate “real world” movementsbecomes more of a concern But these are not the only anomalies12COUPLETS:US 4 in Troy – NB on 4th St, SB on 3rd StNY 2 in Troy – EB on Ferry St, WB on Congress St6

4/1/201913CoupletsFor this “simple” set of couplets: For state purposes, list as one roadwith all lanes and all traffic For city, need to include two streets forfull credit for length CHIPS (state aid)but end up getting “extra” lanes14NY 352 in Elmira – EB on Water St, WB on Church St – but both are two way.WB on Water is not a State Route; EB on Church is not a State Route.So how does one handle reporting lanes and traffic counts?7

4/1/201915CoupletsPair of two way city streets: For state purposes, list as one roadwith all lanes and all traffic For city, need to include two streets forfull credit for length plus need to havea different set of lanes from NY 352 foraccurate traffic counts168

4/1/201917Watertown US 11 and NY 12 couplets; also overlap city streets and NY 3; thissplit was presumably done to mitigate congestion for through trafficbut that need was eliminated with the construction of I-81 manyyears ago. What is the number of lanes on each piece for inventory? ReportUS 11 to HPMS, not Mill St, LeRay St, Holcomb St, Washington St. Also, how does on deal with traffic counts through-out this “mess”? From city perspective it is easy: count each street. From state perspective, how does one answer “what is the two wayAADT on US 11 in Watertown?”18Added complication: Public Square is traversed by all three routes with differentdirections;Should this be modeled as a circular roadway, a divided roadway, other? Need topick up all of the “slip ramps”?This is not unique, although most are squares or circles.This leads to next inventory issue: Roundabouts.9

4/1/201919RoundaboutsBasically a type of intersection Thus far have continued withcenterline concept drawing throughthe circle as one would with astandard intersection Increasing interest in going around thecircle (traffic safety, CHIPS mileage) 20RoundaboutsFull width of circle fits within standard (albeit large) intersection10

4/1/201921RoundaboutsCenterline becomes skewed, even on a straight road,but centerlines on multi-turn lane intersections alsohave alignment issues.Not talking about GIS here, mostly focused on centerline for lengthmeasures, but it becomes more of an issue when you do add in GIS.The Town of Malta is our roundabout capital2211

4/1/201925I split it into 4 arcs for simplicity, but there are actually 8 arcs with different traffic/mixing patterns (affects traffic counts)Are counts on each of those arcs needed on an ongoing basis, or project/accident investigation level only?Magic Roundabout, Swindon, England26Large center circle actually flows in the reverse directionso that the outer circles properly interact with it.13

4/1/2019I-83 / PA-581 Black arrows represent Interstate83 near Lemoyne, PA and theblue arrow represents PA-581. I-83 spanned to the PA-581bridge then begins to run southunder the bridge The outer East/West ramps werenot part of I-83 until 2018 whenthe LRS was reconstructed toincorporate the connecting rampsas part of I-83. PA-581 was thenextended to the new I-83 points. Until this reconstruction, I-83 wasrepresented as a 90 degree bendbut, in reality, did not trulyconnect.Blue is NYS Thruway – I-87 and I-90, Yellow/Orange is Adirondack Northway – I-87 (orange) and a non-Interstate (yellow)3216

4/1/201933Reference route as part of the Interstate system.Orange/red – NB and SB of I-87.Yellow/yellow-orange – EB and WB of I-90.Pink – connecting reference route.Orange/yellow part is technically not part of I-87 or I-90 but is still considered Interstate.3417

4/1/201935Discontinuous RoutesThruway is sort of discontinuousbetween I-87 and I-90 Actual discontinuous routes have gapseither physical or by designation Several Interstates are discontinuousacross the US I-86, I-99 discontinuous, designated in law36Interstate 86 Runs approx. 63 miles west from I-15 inPocatello, IDAlso 207 miles as a conversion of NY 17from I-90 near Erie, Penn, to Waverly, NY Additional 9 miles east of Binghamton as acontinuation of NY 17 conversion to Interstate About 40 miles of NY 17 connects the two NYpieces18

4/1/201937Discontinuities in county and local roads, too.Yellow is County Road 154 Osborne Road plus a little of Sand CreekOrange is town-owned Sand Creek Road except where county owns itDummy segment? Two Roads?Often happens where county roadsmeet state routes (dog leg intersections)and where stop at village lines,continuing on other side38Discontinuous Routes Gap not in Sand Ck name but in ownershipCity streets – 4 Hudson AvenuesService roads such as along Long IslandExpressway – designated as Ref RtesNY 42 Sullivan and Greene Counties, butskips Ulster (can traverse on local roads)PA 43 gap at UniontownMany cities repeat street names – would connect if lines extended; common in NYC;four Hudson Avenues in AlbanyInterstates set as plan nationally so there are gaps,but state routes may do so, too19

4/1/2019PA-43 Black arrows represent tolled portionsof PA-43 that the PennsylvaniaTurnpike Commission owns. PA-43begins at the WV-PA border andextends for approximately 12 milesnorth. PennDOT owns the section of PA-43represented by the blue arrow. The portion of PA-43 ends when itmerges with US-40 just south ofUniontown, PA. The PTC portion of PA-43 resumesnorth of Uniontown and continuesthrough Fayette and WashingtonCounties then later ends in AlleghenyCounty.40“Holes” Similar to “gaps” are “holes”Roadways exist but are not publicAs private roads, they are not part of thefunctional classification system eventhough they may be part of the actual flowof traffic in the network20

4/1/201941Campus roads carry a lot of traffic but are kept private, presumably forcontrol. Closed one 24 hr period per year to retain private status.42Most private roads are on a small, residential scale but some are a significant part of the network.Over ¼ mile of Spackenkill Road 4 lane arterial is owned by IBM causing a “dead end” in an arterial functionalclass.Like colleges, these may cause functional class network not to reflect actual “importantroutes” through an area.21

4/1/201945Another anomaly – bureaucratic orphansOrange part is technically still part ofNY340 as NYSDOT owns it.Town believes they own it and havespent money maintaining it.But no successful effort has been madeto actually abandon it from stateownership to the Town.orphaned by bureaucracy46State Highway Numbers Refers to a specific piece of typically stateowned pavementNot the same as a route number (tied topavement, not the path or “route”)Often non-mainline roadways constructedunder one contract lumped under one SHnumber, yielding some challengesMore on SH numbers (and ref rtes) tomorrow23

4/1/201949Roads leaving the State Two major roads actually owned andmaintained by NYSDOT leave New YorkState NY 17 (someday to be I-86) I-684 One appears to leave the state NY 120A50NY 17 (labeled as I-86 here) enters Pennsylvania. Built and maintained by NYSDOT.Has an Interchange in Pennsylvania (not sure who maintains it).Claimed as in NYS in network and in HPMS.25

A new glacier inventory for the European Alps from Landsat .