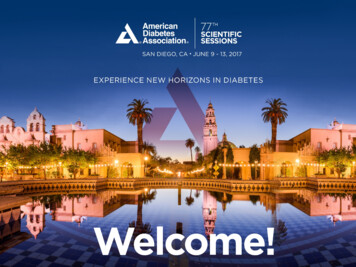 Purpose/Objectives Teens with T1D often struggle with self-management asthey simultaneously face the normal developmentalchallenges of adolescence This often leads to suboptimal adherence and worseningA1c, which can hamper transfer to adult care andpromote early complications in young adulthood Aims:– To identify and evaluate approaches to support the selfcare of teens with T1D– To assess the impact on A1c of 2 interventions, problemsolving and text messaging, implemented in an RCT usinga 2x2 factorial design4

Conclusion Over 1 year, greater response to TM reminders to check BG levels was associated with better glycemic controland no deterioration in A1c; the PS intervention did notimpact glycemic control (A1c)Given the high penetration of mobile phones and the wideacceptance of text messaging among teens in general, itis encouraging that a 2-way SMS text messagingprogram can preserve A1c, thus preventing the expecteddeterioration often seen in teens with T1DUse of 2-way text messaging may help teens with T1D intheir transition to self-care and transfer to adult providers8

EMBARGO POLICY All recordings are for personal use only and notfor rebroadcast online or in any format. Information presented today in this briefing isunder embargo until the end of the formalscientific presentation here at the conference. Please consult the top of each press release forembargo dates and times. Tweeting is not permitted from the news briefingor any sessions. The Association’s social mediateam will be monitoring all channels.

Collaboration-Oriented Modeling of an Offshore Group .