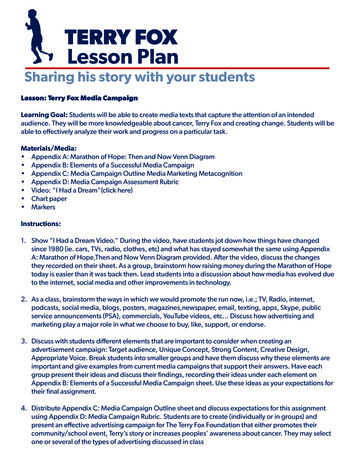 TERRY FOXLesson PlanSharing his story with your studentsLesson: Terry Fox Media CampaignLearning Goal: Students will be able to create media texts that capture the attention of an intendedaudience. They will be more knowledgeable about cancer, Terry Fox and creating change. Students will beable to effectively analyze their work and progress on a particular task.Materials/Media: Appendix A: Marathon of Hope: Then and Now Venn Diagram Appendix B: Elements of a Successful Media Campaign Appendix C: Media Campaign Outline Media Marketing Metacognition Appendix D: Media Campaign Assessment Rubric Video: “I Had a Dream”(click here) Chart paper MarkersInstructions:1. Show “I Had a Dream Video.” During the video, have students jot down how things have changedsince 1980 (ie. cars, TVs, radio, clothes, etc) and what has stayed somewhat the same using AppendixA: Marathon of Hope,Then and Now Venn Diagram provided. After the video, discuss the changesthey recorded on their sheet. As a group, brainstorm how raising money during the Marathon of Hopetoday is easier than it was back then. Lead students into a discussion about how media has evolved dueto the internet, social media and other improvements in technology.2. As a class, brainstorm the ways in which we would promote the run now, i.e.; TV, Radio, internet,podcasts, social media, blogs, posters, magazines,newspaper, email, texting, apps, Skype, publicservice announcements (PSA), commercials, YouTube videos, etc. Discuss how advertising andmarketing play a major role in what we choose to buy, like, support, or endorse.3. Discuss with students different elements that are important to consider when creating anadvertisement campaign: Target audience, Unique Concept, Strong Content, Creative Design,Appropriate Voice. Break students into smaller groups and have them discuss why these elements areimportant and give examples from current media campaigns that support their answers. Have eachgroup present their ideas and discuss their findings, recording their ideas under each element onAppendix B: Elements of a Successful Media Campaign sheet. Use these ideas as your expectations fortheir final assignment.4. Distribute Appendix C: Media Campaign Outline sheet and discuss expectations for this assignmentusing Appendix D: Media Campaign Rubric. Students are to create (individually or in groups) andpresent an effective advertising campaign for The Terry Fox Foundation that either promotes theircommunity/school event, Terry’s story or increases peoples’ awareness about cancer. They may selectone or several of the types of advertising discussed in class

Extension: Encourage students to look at other marketing campaigns with a direct focus on the fiveelements discussed in this lesson. Students could assess these campaigns and present why they mightbe successful or how they could be improved to be more successful.Assessment: Using Appendix D: Media Campaign Rubric provided, students will be assessed on theirfinal products and the ability to reflect on the assignment. Remember to collect the “Media CampaignOutline” and “Media Marketing Metacognition” organizers along with their final product for assessment.Curriculum Expectations:Producing Media Texts 3.4 Generate, gather, and organize ideas and information to write for an intended purpose and audience.Metacognition 4.1 Identify what strategies they found most helpful in making sense of and creating media texts,and explain how these and other strategies can help them improve as media viewers/listeners/producers.

1980NowAppendix A: Marathon of Hope: Then and Now Venn Diagram

Appendix B: Elements of a Successful Media CampaignLet’s break down each of these elements so you can effectivelyincorporate them into your media campaign. Remember to use thissheet as it will be the criteria used for your tCreativeDesignAppropriateVoice

Appendix C: Media Campaign Outline Media Marketing MetacognitionMetacognition is the analysis of one own thinking or learning process. It is always important tolook back at your own accomplishments and determine what worked and what didn’t ptCreativeDesignAppropriateVoiceFor each of the following elements, explain your thinking. Describe the ideasbehind your choices and explain if there is anything you might have changed,had you been given the opportunity.

IDENTITY AND SELF ESTEEM - SPHE