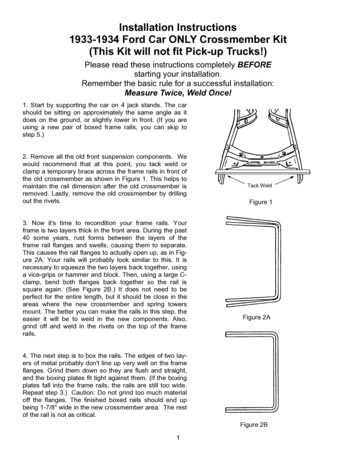 Installation Instructions1933-1934 Ford Car ONLY Crossmember Kit(This Kit will not fit Pick-up Trucks!)Please read these instructions completely BEFOREstarting your installation.Remember the basic rule for a successful installation:Measure Twice, Weld Once!1. Start by supporting the car on 4 jack stands. The carshould be sitting on approximately the same angle as itdoes on the ground, or slightly lower in front. (If you areusing a new pair of boxed frame rails, you can skip tostep 5.)2. Remove all the old front suspension components. Wewould recommend that at this point, you tack weld orclamp a temporary brace across the frame rails in front ofthe old crossmember as shown in Figure 1. This helps tomaintain the rail dimension after the old crossmember isremoved. Lastly, remove the old crossmember by drillingout the rivets.3. Now it's time to recondition your frame rails. Yourframe is two layers thick in the front area. During the past40 some years, rust forms between the layers of theframe rail flanges and swells, causing them to separate.This causes the rail flanges to actually open up, as in Figure 2A. Your rails will probably look similar to this. It isnecessary to squeeze the two layers back together, usinga vice-grips or hammer and block. Then, using a large Cclamp, bend both flanges back together so the rail issquare again. (See Figure 2B.) It does not need to beperfect for the entire length, but it should be close in theareas where the new crossmember and spring towersmount. The better you can make the rails in this step, theeasier it will be to weld in the new components. Also,grind off and weld in the rivets on the top of the framerails.Tack WeldFigure 1Figure 2A4. The next step is to box the rails. The edges of two layers of metal probably don't line up very well on the frameflanges. Grind them down so they are flush and straight,and the boxing plates fit tight against them. (If the boxingplates fall into the frame rails, the rails are still too wide.Repeat step 3.) Caution: Do not grind too much materialoff the flanges. The finished boxed rails should end upbeing 1-7/8" wide in the new crossmember area. The restof the rail is not as critical.Figure 2B1

Installation Instructions1933-1934 Ford Car ONLY Crossmember Kit5. Using the center rivet hole from the old crossmember or the rear top hole from the fenderbracket, mark a line around the outside of the framerail. This is your axle centerline. (See Figure 3.)Figure 3If you purchased a complete I.F.S. Package fromHEIDTS, it was supplied with Full Lower A-Arms.Begin by installing the Lower A-Arms onto thecrossmember. The holes where the lower controlarms attach to the Crossmember must be enlargedto 5/8”. Mount the Crossmember Spacers and theRear Spacers which were supplied with the LowerControl Arms onto the Crossmember as shown inFigure 4 using the supplied Inner Bushing Bolts,Nuts and a temporary spacer under the Nuts. DONOT use the A-Arms for this operation as thewelding heat will melt the rubber bushings. Tightenthe Bolts and Nuts tight. Weld the Rear Spacers tothe Crossmember all around. Weld theCrossmember Spacers as far as possible inside thecrossmember on both ends. Position the Gussetshorizontally, not vertically, against the Rear Spacersand the back of the Crossmember. Weld Gussets toSpacers and Crossmember. When it cools, removethe bolt.Figure 46. Now it is time to start fitting the new crossmember. Slip it into the frame, center it on the scribedaxle center line (Figure 5). If it does not fit, checkthat your frame is the correct width. It should be27-3/8" wide at the axle center line (scribed line). If itis that dimension, then grind the sides of the crossmember until you can get the crossmember inplace, as shown. Tack weld in place, check location,then weld in place, welding all around both ends,top, sides, and bottom. If you installed a temporarybrace across the rails, you can now remove it.Figure 52

Installation Instructions1933-1934 Ford Car ONLY Crossmember Kit1-3/4”7. Next are the spring towers. They sit on topof the frame rails, and are located as shownin Figure 6, (1-3/4", forward of the crossmember measuring from the front of thecrossmember to the front of the springtower). Clamp in place, double check yourdimensions, then weld all around, includingthe gusset flanges on the sides of the rails.For added strength, you can also weld theinside of the gusset flanges. (Hint: Beforeyou install the spring towers, you can weldup and grind flush the old fender bracketholes and the one splash apron hole whichare covered by the spring towers, as theywill no longer be used.)Figure 68. The radiator support tabs are next. Clamp the two tabs to a flat bar as shown in Figure 7. Theyshould be spaced so the holes are spaced 19-3/16" apart, center to center. Position the tab and barassembly up into the frame, so the outer edge of the tab is against the inside bottom edge of theframe. If they fall under the frame, grind the outside edge of the tabs so the edges of the tabs end upinside the bottom inside edge of the frame rail. You will see that the actual radiator mounting surfaceis tilted back, to give the radiator the correct mounting angle.Figure 73

Installation Instructions1933-1934 Ford Car ONLY Crossmember KitYou will see that the actual radiatormounting surface is tilted back, to givethe radiator the correct mounting angle.(See Figure 8) Tack weld in place, andtest fit your radiator if possible. If not,wait to weld these in place until youcan.10. The fender brace adapter bracketis last. Position the bracket as shown inFigure 9. The front surface of thebracket is flush with the front surface ofthe spring tower, the cutout edge iseven with the top edge of the springtower, as shown. Tack weld in place.Using the template supplied, cut off thefactory brace as indicated, and drill thetwo holes as shown. Bolt the fenderbrace to the adapter bracket. Westrongly suggest that at this point youtemporarily trim and install the innersplash aprons and front fenders to insure that the alignment of the factoryfender brace to the fender is correct. Ifnot, loosen the bolts on the fenderbrace and adjust it. If more adjustmentis required, break the tack welds looseon the adapter bracket and repositionit. Once you are satisfied that properalignment has been achieved, removethe fenders, etc. and finish welding theadapter bracket to the spring towers. Ifyou use stock upper control arms youwill find that the inner flange must betrimmed away to clear the adapterbracket.Figure 8Figure 9If you are using stock components, you will need to install strut rod brackets, part no.MP-003-2, purchased separately. Continue on to Step 11. If not, then you are finishedand can proceed on to the assembly and alignment of your suspension.4

1933-1934 Ford Car ONLY Crossmember Kit 3 7. Next are the spring towers. They sit on top of the frame rails, and are located as shown in Figure 6, (1-3/4", forward of the cross-member measuring from the front of the crossmember to the fron