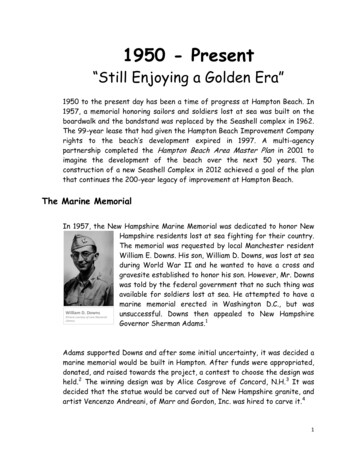 1950 - Present“Still Enjoying a Golden Era”1950 to the present day has been a time of progress at Hampton Beach. In1957, a memorial honoring sailors and soldiers lost at sea was built on theboardwalk and the bandstand was replaced by the Seashell complex in 1962.The 99-year lease that had given the Hampton Beach Improvement Companyrights to the beach’s development expired in 1997. A multi-agencypartnership completed the Hampton Beach Area Master Plan in 2001 toimagine the development of the beach over the next 50 years. Theconstruction of a new Seashell Complex in 2012 achieved a goal of the planthat continues the 200-year legacy of improvement at Hampton Beach.The Marine MemorialIn 1957, the New Hampshire Marine Memorial was dedicated to honor NewHampshire residents lost at sea fighting for their country.The memorial was requested by local Manchester residentWilliam E. Downs. His son, William D. Downs, was lost at seaduring World War II and he wanted to have a cross andgravesite established to honor his son. However, Mr. Downswas told by the federal government that no such thing wasavailable for soldiers lost at sea. He attempted to have amarine memorial erected in Washington D.C., but wasWilliam D. Downsunsuccessful. Downs then appealed to New Hampshire(Picture courtesy of Lane MemorialLibrary)Governor Sherman Adams. 1Adams supported Downs and after some initial uncertainty, it was decided amarine memorial would be built in Hampton. After funds were appropriated,donated, and raised towards the project, a contest to choose the design washeld. 2 The winning design was by Alice Cosgrove of Concord, N.H. 3 It wasdecided that the statue would be carved out of New Hampshire granite, andartist Vencenzo Andreani, of Marr and Gordon, Inc. was hired to carve it. 41

The Hampton Beach Bandstand,1901-1962(Pictures courtesy of Lane Memorial Library)The main theme of Cosgrove’s design was a “womanwatching over the shores, laying a wreath on thewaves.”5 This woman was portrayed as a Gold StarMother, or a mother whose son or daughter losttheir life at war, looking out to sea. The MarineMemorial was dedicated on May 30, Memorial Day, in1957 6 to “all New Hampshire sons and daughters lostor buried at sea during World War II.” 7 Indescribing her own design, Cosgrove said, “Reverentlyshe lays a wreath upon the soft waters whichembrace them. As she looks across the waters, sheasks that the winds and waves be gentle, as a motherwho covers her sleeping child at night.” 8Inscribed on the base of the statue are thewords that Cosgrove chose herself; “Breathesoft, ye winds, Ye waves in silence rest.”These words are from a poem called “AnEpistle to a Lady,” written by John Gay in1714. On the curving wall behind the statue,it said, “In memory of New Hampshire’sheroic war dead lost at sea in defense of ourcountry.” Below that, the names of the menand women to whom the memorial wasdedicated were listed. 9 At first, the MarineMemorial was dedicated only to those lost atsea during World War II, but it was laterexpanded to every New Hampshire soldierlost at sea in every war America engaged in. 10The N.H. Marine Memorial, on the boardwalkacross from the Ashworth Hotel(Picture courtesy of Department Resources of Economic Development)The Seashell ComplexNear the end of the 1950s, the State decided it was time to update thearea around the bandstand. Many of the buildings, including the Chamber ofCommerce and the bandstand itself, were outdated and no longer asefficient as they once were. In 1959, the State began planning a project toreconstruct the development across the street from the Casino. A building2

complex was designed by W. Brooke Fleck, an architect from Hanover, N.H.,to modernize the area. 11 The bandstand was torn down in 1962 to make roomfor this construction project. 12Like the bandstand, the new Seashell Complex was built at the activitycenter of the beach. 13 The facility was completed in 1963 14 and included alifeguard office, the Chamber of Commerce, new public toilets, the policestation, the comfort station, the ticket and popcorn stands, as well as a mainstage to host the concerts and shows that were once featured on thebandstand. 15 The Seashell Complex was designed to be efficient, easilyaccessible, and limit any more developmental impact on the beach.The design was based on a National Park System program called “Mission66.” This program started in 1956 with a goal to elevate the National Parkbuildings to “modern standards of comfort and efficiency,” while stillconserving the natural resources the parks protected. 16 Throughout severalNational Parks, new buildings were constructed that had a modern design tomeet all of these standards, as well as The Modern Movement Seashell Complex, built in 1962(Picture courtesy of Department of Resources and Economic Development)bring the outside world in. Many ofthese new buildings were visitors’centers. The Seashell building wasmodeled after the Mission 66 designs; itwas considered a Modern . It was all-inclusive andwas designed in such a way that itcomplemented the beach rather thanoverwhelming it.Hotels and Motels to CondominiumsIn the 1970s, the atmosphere of the Hampton Beach area changed aspeopled started buying and renting condominiums rather than staying inhotels and motels. The majority of people soon preferred to live in theseindividual spaces rather than the hotels that had dominated Hampton Beachfor the previous one hundred years. This resulted in many of the hotelsbeing replaced by several three to four story condominiums which“substantially altered the earlier appearance of Hampton Beach.” 18 Many of3

the people who visited the beach now intended to stay longer and preferredto have a place of their own to return to each time.The Hampton Beach Area Master PlanIn 1997, the 99-year Hampton Beach Improvement Company lease that wassigned by the Town of Hampton in 1898 expired. The expiration returnedstewardship of the developed areas of Hampton Beach to the Town. 19 Tocontinue the development and improvement of the Hampton Beach area, theHampton Beach Area MasterPlan was adopted in 2001 andwas funded by a partnership , Division of Parksand Recreation. 20Hampton Beach AreaMaster Plan proposed severalTheA drawing from the 2001 Hampton Beach Area Master Plan that depictedthe future development of Hampton Beachactions that would streamline (Photo courtesy of Department of Resources and Economic Development)the area around the Seashell and make it more efficient. The planrecommended spreading the new facilities out in such a way to make themmore accessible. 21 It proposed four steps to significantly improve the areaaround the 1962 Seashell:1. Relocate the South Beach Visitors Center from the beachside to theintersection of the State Route 1A and (Ocean Blvd north bound) andthe current South Beach entrance drive2. Demolish the existing Seashell complex and construct new facilities onthe same footprint3. Build new public facilities near Haverhill Avenue and the MarineMemorial4. Provide site improvements 22These four goals made up one of the first steps in the Hampton Beach AreaMaster Plan. Ultimately, the goal was to create a “more pleasant andaccommodating area for visitors and residents.” 23The New Seashell Complex4

The first Seashell complex had already hosted 48 summers of almost nightlyconcerts, shows, and other forms of entertainment. 24 However, the stagewas not impervious to the changing tastes and damaging ocean winds andweather. According to an article in a 2012 Hampton Union article, officialssaid that “the complex no longer met the needs of today’s tourists andstarted to show its age.” 25 In October of 2010, the Seashell was demolishedto make room for the new and updated facility. The article stated, “Peopleare sad to see the old Seashell Stage torn down but are glad that a new andimproved version will be built.” 26Everything the original complex had, plus some additions, were included inthe new construction. The complexincludes a main stage, seating for 750people, modern bathroom facilities, afunction hall, two pavilions just north andsouth of the main stage, space foradministrative offices and facilities, afirst aid station, and visitor informationcenter. 27, 28An aerial view of the 2012 Seashell Complex(Photo courtesy of Samyn-D’elia Architects)The redevelopment also includes two newbathhouses on the northern and southern parts of the main beach, improvedsignage on the streets, improved parking organization, and small shadedareas. 29 Other new amenities include outdoor “rinse-off” showers, coinoperated lockers, and bikeracks. 30Governor John Lynch cuts the ribbon at the Grand Opening of theSeashell Complex on June 1, 2012(Picture courtesy of Seacoast 0602-NEWS-206020313The Seashell complex wasopened to the public in 2012 witha ribbon-cutting ceremony onJune 1 at the start of thesummer season. New HampshireGovernor John Lynch cut theribbon on the 14.5 milliondevelopment saying that theSeashell complex was just thebeginning of the changes at the5

beach. 31 The Hampton Beach Area Master Plan does in fact imagine theenhancement of the beach over the next 50 years.In a 1988 New Hampshire magazine, Robert Herbert, editor of the HamptonUnion, said of the center of Hampton Beach activity, “in the summer, it’s thegenerator that runs the town’s economy.” 32 This was true then and itcontinues to be true of the area today. In the same article, the chairman ofthe 350th Anniversary General Committee, Jerry McConnell, praisedHampton Beach for its friendly atmosphere, regardless of the growth it hasexperienced over the years. 33 As in the past few decades, “Hampton Beachis still enjoying a golden era, and its waves break as majestically as they did100 years ago.”34 John Greenleaf Whittier’s poem about Hampton Beachremains true, even to the present day:Good by to pain and care! I takeMine ease to-day:Here where these sunny waters break,And ripples this keen breeze, I shakeAll burdens from the heart, all weary thoughts away.35What else does the future hold for Hampton Beach?(Picture courtesy of Lane Memorial Library)6

operated lockers, and bike racks. 30. The Seashell complex was opened to the public in 2012 with a ribboncutting ceremony on - June 1 at the start of the summer season. New Hampshire . Governor John Lynch cuts the ribbon at the Grand Opening of the Seashell Complex on June 1, 2012 (Picture courtesy of Seacoast online)

Your Complete Guide to The Parks Arizona State Parks & Trails

City of Torrington Parks and Recreation Department Parks and Field Use .

Notice of Meeting the Arizona State Parks and Trails