A Garden To Teach And Inspire - Ellington CMS 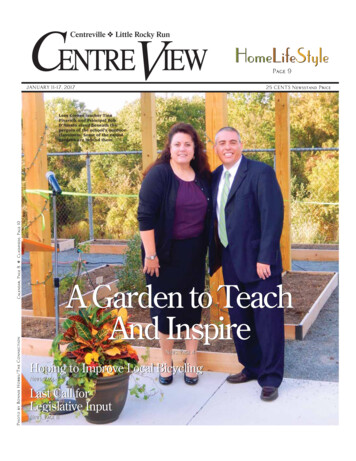 NewsPhotos by Bonnie Hobbs/Centre ViewPrincipal Bob D’Amato speaks during the ribbon-cutting ceremony. Thebacks of the benches can be turned into tables.Clapping after cutting the ribbon on the outdoor classroom are (fromleft) Bob D’Amato, Tina Pivarnik, Frances Ivey, Assistant PrincipalVaRonica Sloan, Region V Executive Principal Rebecca Baenig andZippy Shell’s Paul Vicente.‘What If a Garden Could Teach, Inspire Children?’Lees Cornercelebrates itsoutdoor classroom.By Bonnie HobbsCentre Viewt took the combined actions of manypeople to bring Lees CornerElementary’s outdoor classroom tofruition. But it began with the visionof third-grade teacher Tina Pivarnik.“I started here as the primary, lead science teacher, and I thought we could domore than plant a tree or recycle paper,”she said. “And I wanted our kids back outside again.”Once just grass, the site behind the schoolnow contains 15 raised, garden beds arounda wooden pergola with latticework sides,plus a cement patio with benches that flipback to become tables.Created before school began in September, it’s now a learning environment whereall ages may do particular reading, mathand art projects outside. The garden bedsare tied to each grade level’s curriculum,and the pergola can be used for events andguest speakers.“We also plan an outdoor whiteboard forteachers on the brick wall at the back ofthe patio,” said Pivarnik. “And our specialneeds and autistic kids will have a safe-playarea with a touch wall off to one side of thepatio, so it’ll be a five-senses garden withwheelchair-accessible planter beds.”To kick off the funding for it, last February, the school received a 2,000 grant fromthe Whole Foods’s Healthy Kids Foundation.It also won a sweepstakes sponsored byI4 Centre View January 11-17, 2017WTOP radio and Zippy Shell Moving & Storage.“We wrote a proposal telling what we’duse the money for, and we were up againsthigh schools,” said Pivarnik. “The schoolwith the most votes won — and you had tobe 13 or older to vote — so we were at ahuge disadvantage. But still, we were neckand-neck ’til the last three months. Firstprize was 20,000, and we won second — 10,000.”A PTA booster track event last springraised 18,000 more, for 30,000 total, tobuild and maintain the outdoor classroom.“It’s amazing,” said Pivarnik. “It’s unbelievable to see a dream realized, especiallywhen you aim big and it gets bigger thanyou ever thought.”But she said it wouldn’t have been possible without the whole communityfundraising and supporting her efforts. Sheespecially praised J&M Landscaping, Portugal Construction and Custom Fence. Andat the recent ribbon-cutting ceremony forthe classroom, Lees Corner Principal BobD’Amato told those attending how proudhe was of the school’s accomplishment, ofPivarnik and of contractor and parent DaveTrumbull.D’Amato said Pivarnik’s “sheer joy forconnecting the environment and school wascontagious. She applied for every grantpossible and we set goals and made plansfor implementation. And we realized wecould do it with hard work and dedication.”As for Trumbull, D’Amato said, “Hereached out and helped design and developthis beautiful project, and his team of contractor friends helped build it. He realizedwhat a great learning opportunity it’ll befor students for years to come, and we’regrateful for all their generosity. And ourparents raised money and helped assemblethe benches.”He said the outdoor classroom fits rightin with Lees Corner’s green-school initiative. And the school is taking three paths toachieve it. The first is cutting back on electricity use to save energy. During the lastschool year, Lees Corner saved more than 4,000 this way.The second is reducing waste. “We savedover 500 pounds of food in our cafeterialast year, put it in our refrigerator and donated it to a local food bank at the end ofeach week,” said D’Amato. “It was food thestudents didn’t eat during the week. Andwe’ll eventually grow our own fruits andvegetables here to serve in the cafeteria.”The third path is healthy living by making sure the school staff and students arehealthy. “Our teachers ran or walked anadditional 2,400 miles last year,” saidD’Amato. “And we have Fun, Fit Fridays. Inthe morning, we play music, and the students and teachers run or walk around thetrack. It relieves stress and gets the kidsready to learn.”And each day, he said, “Our staff continues to grow and learn about nature and theenvironment. Our kids love this outdoorlearning space; and as principal, I’m proudto lead this charge. But we appreciate youall and thank you for taking this step withus.”Also addressing the crowd, Pivarnik said,“This is the end of one phase of our journeyand the beginning of many possibilities tocome. At the start, seven or eight years ago,I asked, ‘What if?’ What if we could havemore of a hands-on experience for our kids?What if we could build garden boxes here?What if our garden spaces were accessibleto all students — and what if they reflectedour curriculum, instead of just being ornamental?“What if a garden could teach and sustain, support and inspire children to careabout a living thing that depends on us?And what if that caring is extended to ourrelationships, our jobs and into the community outside of Lees Corner?”So Pivarnik started researching gardensand the value of children being outdoors.And that’s especially important today, shesaid. “when so many children spend somuch time indoors, looking at an electronicscreen. Here, they can plant pollinator gardens and organic produce and marry whatthey learn to social studies and other subjects.” For example, she said, students coulduse Colonial methods to start their gardensand could host Thomas Jefferson’s plants.Then they could have poetry time and readbooks on the grass. Furthermore, saidPivarnik, “The produce we grow can alsosupport our school families; and in exchange, the families receiving it can workin the garden.” Then, quoting inspirationalwriter Steve Maraboli, she said, “Plant seedsof happiness, hope, success and love. It willall come back to you in abundance; this isthe law of nature.”Next, Region V Superintendent FrancesIvey congratulated and thanked the school.“This is an example of what can be accomplished when we have visionary leaders,opportunities and resources from businesses, and the strong support of the parents, teachers, Chantilly Pyramid, RegionV principals and FCPS facilities staff,” shesaid. “And I look forward to the ‘what ifs’for many years to come.”At the end of the ceremony, just beforethe outdoor classroom’s ribbon-cutting, kindergarten teacher Martha Hellman gavePivarnik a gift “in awe and in gratitude forwhat you’ve given to our school. It’s a giftfor all of us.”www.ConnectionNewspapers.com

NewsPredatory Loans in the CrossfireLawmakers conflicted about how to handle high-interest loans.By Michael Lee PopeCentre Viewt this time last year, members ofthe General Assembly were feeling the heat about car-title lending. Public outrage was growingabout the industry, which charges interestrates in excess of 300 percent in some of thepoorest neighborhoods in Northern Virginia.Lawmakers were particularly concerned thatcar-title lenders were evading the regulationsthey put in place to protect consumers by offering more than one kind of loan at theirstorefront locations, a move many membersof the General Assembly considered a baitand-switch operation.Behind the scenes, car-title lenders weretaking action to head off efforts to crack downon their industry.In the week before the General Assemblysession began, title lenders gave 35,000 incampaign contributions even though the campaign for General Assembly seats had endedthe previous November. Like many businesses,title lenders make a habit of making campaigncontributions after the election and before thesession, during which they are prohibited fromgiving. The donations are not reported untilAwww.ConnectionNewspapers.comafter the session, so following the money isn’treally a possibly during the flurry of action inRichmond.“They serve a very useful purpose for thebusiness because it reminds people right at thestart of the session who their friends are,” saidStephen Farnsworth, political science professor at the University of Mary Washington. “Thecoalition of people to block regulation mayinclude some Democrats and some Republicans, and that’s why they are equal opportunity givers. Some money goes to Democratsand some goes to Republicans.”Take, for example, the 15,000 contributionLoanMax gave to the Senate Democratic Caucus the day before the session began. A fewdays later, the Senate Democratic leaderbrokered a deal that involved two of the state’sleading title lenders voluntarily agreeing tostop offering multiple kinds of loans at theirstorefront locations. That deal ended up torpedoing all the reform bills.“It’s impossible to say that there was a quidpro quo. I mean, you just can’t say that,” saidQuentin Kidd, a professor at Christopher Newport University. “But it is possible to say thatthere was an effort on LoanMax’s part to gainaccess to elected officials so that their casecould be heard.”Senate Democratic Leader Dick Saslaw, thesenior member of the Fairfax County delegation in the state Senate, is the one who negotiated the deal involving a voluntary agreement with two of the three title lenders authorized to offer consumer finance loans.LoanMax was not part of that deal, eventhough it had dual license authority at thetime. Saslaw says LoanMax isn’t the problem.“LoanMax doesn’t do that business,” saysSaslaw. “They don’t do it in the same facility.They’re the ones that called and alerted meto what was going on.”According to public documents from theState Corporation Commission, LoanMax haddual licensing authority to offer car-title loansas well as consumer finance loans at its Alexandria location on Mount Vernon Avenue inthe Arlandria neighborhood.The commission also has documents thatshow how many loans made last year — including what kind of loans — as well as howmany automobiles the company repossessed.But regulators don’t want to hand over thosedocuments. And Saslaw isn’t in the mood toanswer questions about his involvement in thedeal.“They don’t do it,” he said when asked aboutSee Predatory Loans, Page 7Centre View January 11-17, 2017 5

NewsPredatory Loans in the CrossfirePredatory LoansFrom Page 5LoanMax. “End of discussion.” Car-Title Loans: Last year, two of the three biggest car-title lenders cut a deal withthe Senate Democratic leader to avoid additional regulations. Part of the arrangementincluded state regulators withdrawing the ability of car-title lenders to offer other kindsof loans at the same location, which many lawmakers considered a bait-and-switch operation. Regulators said they didn’t have the authority to do that, so lawmakers may takeaction to limit car-title lenders to car-title loans. The Virginia Supreme Court is alsoconsidering a case that could open up the books to show how many loans individualbusinesses are making and how many cars they are repossessing. Open-End Line of Credit Loans: These were originally created so consumerscould purchase appliances from department stores, but they have now become a favoriteproduct by former payday lenders that don’t want to deal with all the regulations lawmakers created for the industry. They are almost completely unregulated. State regulators don’t track them. Lenders don’t need a license to offer them. There’s no limit on theinterest rates they can charge. Lawmakers will be considering an effort to make theseloans subject to the same restrictions as payday loans and car-title loans. Internet Loans: They may be technically illegal in Virginia, but that doesn’t meanthat businesses aren’t eager to offer people who live here loans at up to 900 percentinterest. Last year, a company known as OneMain persuaded Del. Terry Kilgore (R-1),chairman of the Commerce and Labor Committee, to introduce legislation legalizinginternet lending. That bill failed, but more may be on the way this year.THE DISCUSSION ABOUT car-title lending may not be over yet though. AfterSaslaw cut the deal with industry leaders,he and state Sen. Frank Wagner (R-7) senta letter to the State Corporation Commission asking “your assistance in removingdual business authority for title, payday oropen-end lending companies operating atthe same location.”Regula

cating for a parallel bike trail along I-66 in Fairfax County, and it's now in the plans. We've also been working to get a bike-park-ing ordinance enacted in commercial de-velopments so, when they're built, they'd have to include bike-parking areas and racks." Fairfax County Bicycle Coordinator Adam Lind noted that, in 2014, the .