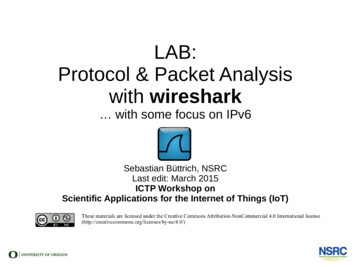 Some termsYou will frequently find words like . Dumping capturing packets from interfacesand saving to file (called a dump) Sniffing looking/listening for packets to dump

Where to capture packetsIn order to capture relevant data,we need to dump packets on network interfacesthat can see the traffic of interest e.g.on a switch, a gateway, a router,on wireless interfaces in monitor mode

Remote dumping & importingOften, we would like to use wireshark GUI ondumps collected in remote places without GUI,e.g. via tcpdump: tcpdump i interface s 65535 w some file The output file can then be imported by wireshark.

Bluetooth and wiresharkYou can capture Bluetooth traffic to or from your machine on Linux in Wireshark withlibpcap 0.9.6 and later, if the kernel includes the BlueZ Bluetooth stack;starting with the 2.4.6 kernel, the BlueZ stack was incorporated into the mainlinekernel.Note that Debian and Debian derived derivatives call the libpcap package "libpcap 0.8"; this does ***NOT*** mean that all such systems use libpcap 0.8.Debian and its derivatives continue to use the name "libpcap 0.8",even though newer versions' libpcap packages use newer versions of libpcap;for example, Wheezy's libpcap 0.8 package uses libpcap 1.3.0.If it's supported, and if you have sufficient privileges to capture,there will be interfaces named bluetoothN for various values of N starting with 0.To passively capture Bluetooth traffic between other machines, you can use theUbertooth USB device. There is currently no libpcap support for Ubertooth, so youcan't capture with Wireshark.However, there is a plugin for Kismet look for "Kismet" on the "Getting Started"Ubertooth page and it produces capture files that can be dissected with a Wiresharkplugin.

wiresharkLAB: Installation Start Basic functionality Some exercises Your own use cases?

wireshark – file menu Exercise 2: save your capture to file, and then open it again Exercise 3: find a 6Lowpan capture onhttps://wiki.wireshark.org and open it

wireshark – statistics Exercise 2: save your capture to file, and then open it again Exercise 3: find a 6Lowpan capture on https://wiki.wireshark.organd open it

wireshark – filters & expressions Exercise 6:leave wireshark for a moment and find facebooks ipv6address – if they have one? . ping6 or produce some other traffic to that address, captureand then find it in your wireshark capture Can you find any broadcast traffic in IPv6 packets? . Move over to IPv4 – can you see broadcast traffic there?Look at your protocols – what protocols create broadcasttraffic?

wireshark – filters & expressions Exercise 7:start a new dump and filter for ICMPv6 – what kinds of packetsdo you see? . . Try to find a Router Advertisement – and look into it.What prefix is being advertised? .Who sent this Advertisement? .

wireshark – additonal funAdditonal exercises: Explore statistics possibilities -what are your most active protocols, IPs, streams? Do a tcpdump on a (remote) command line and analyze itwith wireshark Consider if and how wireshark would be useful in- our sensor deployment?- your own work?

[email protected] image was originally posted to Flickr by hermanusbackpackers at t was reviewed on 25 September 2009 by the FlickreviewR robot and was confirmed to be licensed under the terms of the cc-by-2.0.

wireshark "Wireshark is a free and open-source packet analyzer. It is used for network troubleshooting, analysis, software and communications protocol development, and education. Originally named Ethereal, the project was renamed Wireshark in May 2006 due to trademark issues." [wikipedia]