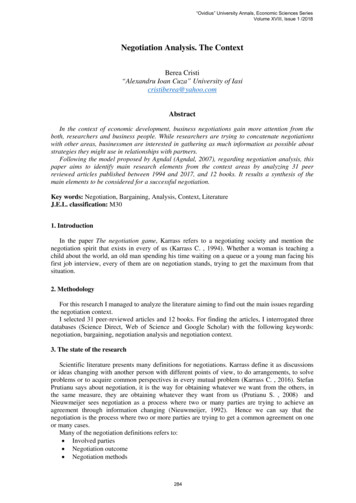 “Ovidius” University Annals, Economic Sciences SeriesVolume XVIII, Issue 1 /2018Negotiation Analysis. The ContextBerea Cristi“Alexandru Ioan Cuza” University of [email protected] the context of economic development, business negotiations gain more attention from theboth, researchers and business people. While researchers are trying to concatenate negotiationswith other areas, businessmen are interested in gathering as much information as possible aboutstrategies they might use in relationships with partners.Following the model proposed by Agndal (Agndal, 2007), regarding negotiation analysis, thispaper aims to identify main research elements from the context areas by analyzing 31 peerreviewed articles published between 1994 and 2017, and 12 books. It results a synthesis of themain elements to be considered for a successful negotiation.Key words: Negotiation, Bargaining, Analysis, Context, LiteratureJ.E.L. classification: M301. IntroductionIn the paper The negotiation game, Karrass refers to a negotiating society and mention thenegotiation spirit that exists in every of us (Karrass C. , 1994). Whether a woman is teaching achild about the world, an old man spending his time waiting on a queue or a young man facing hisfirst job interview, every of them are on negotiation stands, trying to get the maximum from thatsituation.2. MethodologyFor this research I managed to analyze the literature aiming to find out the main issues regardingthe negotiation context.I selected 31 peer-reviewed articles and 12 books. For finding the articles, I interrogated threedatabases (Science Direct, Web of Science and Google Scholar) with the following keywords:negotiation, bargaining, negotiation analysis and negotiation context.3. The state of the researchScientific literature presents many definitions for negotiations. Karrass define it as discussionsor ideas changing with another person with different points of view, to do arrangements, to solveproblems or to acquire common perspectives in every mutual problem (Karrass C. , 2016). StefanPrutianu says about negotiation, it is the way for obtaining whatever we want from the others, inthe same measure, they are obtaining whatever they want from us (Prutianu S. , 2008) andNieuwmeijer sees negotiation as a process where two or many parties are trying to achieve anagreement through information changing (Nieuwmeijer, 1992). Hence we can say that thenegotiation is the process where two or more parties are trying to get a common agreement on oneor many cases.Many of the negotiation definitions refers to: Involved parties Negotiation outcome Negotiation methods284

“Ovidius” University Annals, Economic Sciences SeriesVolume XVIII, Issue 1 /2018 Involved changesAs Gates says, the negotiation assume complex feelings, that many of us are trying to avoid butin the same time, it is fundamental for the business growth (Gates, 2016). All the processesdeveloped in a company assume one or many negotiations, even it’s an operative meeting (in whichone or many people involved, are trying to impose), a sale or a session for analyzing the productreliability. The negotiation is about presenting our personal opinion and convincing the others thatit is the proper.The experience of corporations who came in the east of Europe in the 2000s hadmodified the local perception about business practices. The complex processes in which companiesare involved, challenges employees to find intelligent solutions to their tasks. The individual workperformed up to several decades, is replaced now with teamwork. Instead of one person developinga process, now it exists an entirely team to deal with the issue. One-by-one meeting with thesupervisor turned into brainstorming sessions in which every participant can propose newconstructive ideas. There are studies proves that the team results are net superior to the individualones (Saad G., et. all, 2015) (Lindsjørn Y., et. all, 2016).Along with the changing of business style, the skills needed by the individuals changes too,focusing on relationship and adaptation capabilities. A side effect of accentuating relationshipsbetween the team members and HR policies, is the organizational behavior which started todevelop and to represent a highly motivational element (Hanaysha, 2016).Teamwork is about communication. In order for individual to deliver the required results, theymust be able to work together, to complete each other and to use the same parlance. Everyinteraction between them represents a state of negotiation, whether it’s about setting a deadline,tasks distribution or a new concept proposal.In addition to internal interaction between team members, customer and supplier relationshipsare the most significantly domain in the negotiation area. Selling or purchasing in convenient termsdifferentiate a winning by a losing deal. The employees who manage relationships with partners,have communication and persuasion skills and often achieve superior results using well knownnegotiation techniques and strategies (Monteserin & Amandi, 2015).4. The negotiation contextIn order to occur – even is a success or not – a negotiation need a context. The research innegotiation usually involves the isolation of the phenomenon so that the context does not affect theresults (Carnevale & De Drew, 2011) but in the real economy, the negotiation outcome depends onit.Negotiation environmentThe negotiation environment is an extremely important variable in a negotiation and can bedefined as the location for the negotiation. On the beginning, all the negotiations took place face toface, being necessary the physical movement of one or both partners. The recent years’ practicebrings computer-mediated negotiations, weather we are talking about videoconferencing or onlineauctions and the partners do not have the opportunity to know each other.Is well known that “home negotiations” favor hosts. They can feel a plus of safety andconfidence, which brings disadvantage to the opponent. For a proper negotiation, it is advisable toopt for a neutral location, which is not in the sphere of influence of any party (Prutianu S. , 2000).In the same time, if the main objective is developing a long term partnership, is very important toknow the partner; that’s why a first visit at his office for opening any possible negotiations may beauspicious.Time-related issues are analyzed in the literature through two recitals: The moment chosen to negotiate; Deadlines: time pressure.The moment of negotiation is the part of the day the negotiations are actually taking place.An expert in the art of negotiations is aware of the importance of time and will look for the besttime to schedule them. Depending on the objectives, on international negotiations he can schedulethe discussions immediately after the partners have landed – which give him a net advantage285

“Ovidius” University Annals, Economic Sciences SeriesVolume XVIII, Issue 1 /2018because the guests can be tired – or he can leave them for the next day, which demonstrates that therelationship between the two parties is a collaboration.A Machiavelli situation, but ordinary in economy is that in which a company encountersfinancial or operation-related problems – either they lost an important partner or failed to carry outa task from a contract or have financial problems – and a partner searching for easy earnings willpush on the time factor and will try to renegotiate the terms and conditions, being aware that itsnegotiation power has dropped considerably.Time pressure regarding the contracts’ signing is a strategy applied and researched in literature(Mosterd & Rutte, 2000). Studies have shown that a high constraint on the deadlines, leads toconcessions higher than the usual ones (Stuhlmacher & Champagne, 2000).The issue of negotiationThe topic of negotiation is multiple, basically we can negotiate every event, situation or action,whether we are referring to day by day activities or corporate business operations.The first thing everyone thinks when hears “negotiation”, is selling or purchasing of goods, andthis is the most widespread meaning of the studies (Buelens, M.; et all., 2007). Conflict mediationthrough negotiation is another area of interest, especially for international relationship studies orlow. They are focusing on finding acceptable solutions for every parties involved (Goltsman & all,2009). Other situations we can negotiate are the tasks we have to deal with colleagues, spendingtime or engaging in a new company.Maybe a less analyzed area is what we cannot negotiate, and the answer at this question dependson the individual personality and involves elements related to individual or social beliefs.Cultural contextEven we will be tempted to think that cultural context area can’t exist outside of internationalnegotiations, this subject is a lot more extensive and it can be analyzed even in domesticnegotiations. In fact, when we talk about interculturalism, we don’t do it considering theboundaries of territory but rather the limits to which the cultural elements of a group lie. Its valuesand beliefs differentiate it from another social group (Lytle & all, 1999). There are studies provingthat cultural differences influence the rationality and the way in which different topics areaddressed, inclusive bargaining (Gelfand & Christakopoulou, 1999).All the cultural dimensions developed by Hofstede (Hofstede, 2017) are important when weanalyze the culture of a social group but in negotiations, Brett propose a research based on threecriteria (Brett, 2007): Individualism – collectivism Hierarchy – Egalitarianism Direct communication – indirect communicationIndividualism based societies, counts on the individual’s participation to the “common good”.He is respected for his skills and is supported to develop actions on his own. On the contrary, incollectivism, the individual is just a member of the group and just in the group he can create anddemonstrate its skills.In the case of societies where hierarchy is highlighted, the social status prevails and theindividual is encouraged to manifest themselves, gaining recognition and a higher rank in the socialhierarchy (Leung, 1997); despite the egalitarianism based societies, where the merits belongs to thegroup and they try capping the individuals.The communication style can differentiate a culture from another. An indirect communicationstyle is a characteristic of collectivist societies, where the meaning of the words is provided by thesocial context. On the other side, direct communication is explicit; although the individualsbelonging to a society in which the style of communication is direct, are in the same social context,they should not be aware of it when communicating because the message is clearly transmitted(Brett, 2007).286

Scientific literature presents many definitions for negotiations. Karrass define it as discussions or ideas changing with another person with different points of view, to do arrangements, to solve problems or to acquire common perspectives in every mutual problem (Karrass C. , 2016). Stefan Prutianu says about negotiation, it is the way for obta.

Please click on the State code to view the complete school .

The Handbook of Negotiation and Culture - unice.fr