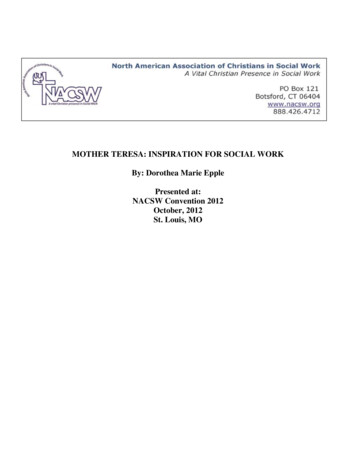 AGENDA: A brief biographical sketch of Mother TeresaCalling to serve the poor in CalcuttaMystical experiencesThe Missionaries of CharityDark Night of the Soul The contemplative prayer life of MotherTeresa The humor of Mother Teresa What social workers can learn from her mercyand love regarding meaningful work andservice.

“NO ONE IN OUR PRESENT DAYWORLD HAD A TRUERUNDERSTANDING OF MERCY THANMOTHER TERESA OF CALCUTTA. SHESERVED WITH MERCY AND LOVE THEUNWANTED, UNLOVED, DYING,DESTITUTE, ABANDONED, OUTCASTS– ALL WHO HAVE LOST HOPE ANDFAITH.”

BRIEF BIOGRAPHY Mother Teresa – born – Agnes Gonxha 1910 - in Albania Her mother told Agnes “When you do good, do it quietly, as if youwere throwing a stone into the sea”Called by God to do smallthings with great love inorder to bring Christ to thepoorest and the poorest toChrist (Martin, 2006) Agnes dreamed of a religious life afterhearing of the work of Catholicmissionaries at the age of 12 18 years old entered novitiate of theLoreto Sisters in Dublin Ireland She chose the name Teresa to honor St.Therese of Lisieux Taught in a Catholic school in Calcutta Made a private vow to give God anythinghe may ask and not to refuse him anything 1946 train ride to Darjeeling “A Call within a Call”

“I Thirst”John 19: 28His infinite Thirst“to love us and to beloved by us ” A Vision in 3 parts: “Locution” First Scene - A large crowd of the poor – youngand old Reaching out to Mother Teresa – as she stood in theirmidst Calling out for her to save them to bring them toJesus Second Scene - She saw the sorrow and sufferingin their faces Our Lady was in their midst - Mother Teresa waskneeling at her side “Take care of them – they are mine – Bring them toJesus – carry Jesus to them – Fear not.” Third Scene - The same anguished crowd Jesus on the Cross Mother Teresa as a little child in front of Our Lady asthey faced the cross “Jesus said to her: I have asked you. They have askedyou, and she, My Mother, has asked you. Will yourefuse to do this for me – to take care of them, tobring them to me? . . . In your love for me – they willsee Me, Know Me, want Me” Langford, J ( 2007, p. 20)

The poor had become bearers ofHis Passion Our Lady at the foot of the cross A bridge between Mother Teresa and thepoor who cried out to her A bridge between the poor and thecrucified Jesus who thirsted for them “It is these three – the poor, Jesuscrucified, and Our Lady – who restat the heart of Mother Teresa’sremarkable God-given grace andmission”Langford, J ( 2007, p. 20)

The Missionaries ofCharity start the day’swork with the sameprayer from theircommunity prayer book“God speaks in the silence ofour heart, and we listen. Then,out of the fullness of ourheart, we speak and he listens.And that is prayer” Dear Lord, the Great Healer, Ikneel before you, since everyperfect gift must come fromyou. I pray, give skill to myhands, clear vision to my mind,kindness and meekness to myheart. Give me singleness ofpurpose, strength to lift up apart of the burden of mysuffering fellowmen, and arealization of the privilege that ismine. Take from my heart allguile and worldliness, that withthe simple faith of a child, I mayrely on you, Amen.

“If I surrender myselftotally to Jesus, I belongto Him” Missionaries of Charity Three Fold Mission Loving Trust Total Surrender Cheerfulness

“Holy Father we need a Saint for our leapers”

A Beacon in Our NightLANGFORD (2007, P. 15) DESCRIBES MOTHERTERESA’S DARK NIGHT OF THE SOUL:“GOD FASHIONED MOTHER TERESA INTO ANINSTRUMENT THAT WOULD LIGHT UP OURNIGHT AT ITS DARKEST, BY LEADING HERTHROUGH THAT DARKNESS BEFORE US.”“O BLESSED NIGHT” THAT BRINGS IN ITSSILENT WAKE SUCH BLESSINGS(ST. JOHN OF THE CROSS)

A TESTIMONY OF FIDELITY“I HAVE COME TO LOVE THE DARKNESSFOR I BELIEVE IT IS A PART, A VERY VERYSMALL PART OF JESUS’ DARKNESS ANDPAIN ON EARTH.” MOTHER TERESA“IF I EVER BECOME A SAINT –I WILLSURELY BE ONE OF “DARKNESS. I WILLCONTINUALLY BE ABSENT FROMHEAVEN –TO LIGHT THE LIGHT OF THOSEIN DARKNESS ON EARTH”MOTHER TERESA

"Find the sick, the sufferingand the lonely right therewhere you are. . . . You canfind Calcutta all over theworld, if you have the eyes tosee." --Mother TeresaNot everyone can go toCalcutta. But all of us can findour own meaningful workand service What Social Workers Can Learn FromMother TeresaMary Poplin (2008) Finding Calcutta: What MotherTeresa taught me about meaningful work and service. Mother Teresa saw her work as religious work Redemptive God can do more through human beings thanhuman beings can do on their own Redemptive work entails suffering “Suffering in itself is nothing, but suffering sharedwith the passion of Christ is a wonderful gift . . .Because suffering was how he paid for sin.” Mother Teresa (1996). A Gift for God. “Vocation means Jesus has called us by name”– Mother Teresa All humans have one vocation – to belong to God Within that lie many different callings

What Social WorkersCan Learn FromMother Teresa“Finding Calcutta” “Mother Teresa frequently called thework ‘Just a drop in the ocean. But ifthat drop was not in the ocean, I thinkthe ocean would be less’ ” (Poplin, 2008, p. 94)Mary Poplin returned fromCalcutta and discovered thatGod was calling her to servethe university world with thesame kind of holistic servicewith which Mother Teresaserved Calcutta “While with the Missionaries, I learnedthe satisfaction and joy of meeting asimple need and moving on to meetthe next one” (Poplin, 2008, 96) “Doing small things with great love” “There is nothing small to God, onceyou give it to God, it is infinite.”(Mother Teresa)

“If we come to see you,would you light thelamp?” he agreed, andthey began to visit himregularly. He lived anothertwo years and kept hishouse clean. He sentMother Teresa a message,“Tell my friend that thelight that she lit in my lifeis still shining.” (Poplin, p.128) Mother Teresa believed “the mostdevastating disease of humanity was notillness, hunger or poverty, but lonelinessand the sense of being unloved that sheencountered in people all over the world”(Poplin, p.128).

What Social Workers Can Learn FromMother Teresa Matthew 25:35 “What ever you do for theleast of my brethren this you do unto me” Mother Teresa told Dr. Wright: “Don’tever forget whom you are touching. Thatperson is Christ, your brother or sister inthe distressing disguise of the poor. Servethat person with compassion. This is yourpurpose in life . . . This is how you will bejudged.” “You must go home and grow in love andcompassion in your own community. TheStreets of Calcutta lead to everyone’sdoor” (Wright, 2006, p. 50)

Just what is this prescription? Ten attitudes of spirit - from Mother Teresa Commitment to community Reverence of all human life Compassion and love Contentment and gratitude Faith Humility Tolerance Patience Forgiveness Honesty “You will know that you have succeededwhen you are surrounded by the storm andconfusion of life, yet feel serene andconfident” (Wright, 2006, p. 56-57)

Mother Teresa: “Why do you thinkGod has chosen you to be apriest?” Father Benedict: “I don’t know –Maybe it is because he has a senseof humor” Mother Teresa: “You are chosenbecause of the humility of God.God chooses the weakest and thepoorest, the most inappropriatepersons to use. . . . I pray that myplace will be taken by the mostunattractive and ungifted of all thesisters. Then everyone will knowthat this is not our work but God’swork. Don’t ever forget that youare chosen by the humility of God.”

Criticisms of The Missionaries ofCharityIt did nothing regardingthe macro efforts to curepoverty“YOU TAKE CARE OF THEIRTOMORROWS; I TAKE CARE OF THEIRTODAYS” (MOTHER TERESA)“MY POOR PEOPLE ARE TOO WEEK TO HOLDTHE FISHING ROD THEMSELVES . . BUT IFTHEY ARE EVER WELL ENOUGH TO HOLD AFISHING ROD, THEN OUR CRITICS CAN GOAHEAD AND TEACH THEM HOW TO FISH”MAASBURG (2006)

Quotes by Mother Teresa We need to find God, and he cannot be found in noise and restlessness. God is the friend of silence. Seehow nature - trees, flowers, grass- grows in silence; see the stars, the moon and the sun, how they move insilence. We need silence to be able to touch souls. In this life we cannot do great things. We can only do small things with great loveBe faithful in small things because it is in them that your strength lies.Do not wait for leaders; do it alone, person to person.I do not pray for success, I ask for faithfulness Let us touch the dying, the poor, the lonely and the unwanted according to the graces we have receivedand let us not be ashamed or slow to do the humble work Each one of them is Jesus in disguise. I have found the paradox, that if you love until it hurts, there can be no more hurt, only more love. Loneliness and the feeling of being unwanted is the most terrible poverty. There is more hunger in the world for love and appreciation in this world than for bread. Kind words can be short and easy to speak, but their echoes are truly endless Words which do not give the light of Christ increase the darkness I am a little pencil in the hand of a writing God who is sending a love letter to the world. We are all pencils in the hand of God. We ourselves feel that what we are doing is just a drop in the ocean. But the ocean would be less becauseof that missing drop. esa/quote.html

o They all tell of her limitless trust in God's love, of the way the ther T

Collaboration-Oriented Modeling of an Offshore Group .